The predecessor to the vacuum pump was the suction pump, which was known to the Romans. Dual-action suction pumps were found in the city of Pompeii. Arabic engineer Al-Jazari also described suction pumps in the 13th century. He said that his model was a larger version of the siphons the Byzantines used to discharge the Greek fire.[2] The suction pump later reappeared in Europe from the 15th century.

By the 17th century, water pump designs had improved to the point that they produced measurable vacuums, but this was not immediately understood. What was known was that suction pumps could not pull water beyond a certain height: 18 Florentine yards according to a measurement taken around 1635. (The conversion to metres is uncertain, but it would be about 9 or 10 metres.) This limit was a concern to irrigation projects, mine drainage, and decorative water fountains planned by the Duke of Tuscany, so the duke commissioned Galileo to investigate the problem. Galileo advertised the puzzle to other scientists, including Gasparo Berti who replicated it by building the first water barometer in Rome in 1639.Berti's barometer produced a vacuum above the water column, but he could not explain it. The breakthrough was made by Evangelista Torricelli in 1643. Building upon Galileo's notes, he built the first mercury barometer and wrote a convincing argument that the space at the top was a vacuum. The height of the column was then limited to the maximum weight that atmospheric pressure could support; this is the limiting height of a suction pump.In 1654, Otto von Guericke invented the first vacuum pump and conducted his famous Magdeburg hemispheres experiment, showing that teams of horses could not separate two hemispheres from which the air had been evacuated. Robert Boyle improved Guericke's design and conducted experiments on the properties of vacuum. Robert Hooke also helped Boyle produce an air pump which helped to produce the vacuum. The study of vacuum then lapsed until 1855, when Heinrich Geissler invented the mercury displacement pump and achieved a record vacuum of about 10 Pa (0.1 Torr). A number of electrical properties become observable at this vacuum level, and this renewed interest in vacuum. This, in turn, led to the development of the vacuum tube.

In the 19th century, Nikola Tesla designed an apparatus that contains a Sprengel pump to create a high degree of exhaustion.

Pumps can be broadly categorized according to three techniques:

Positive displacement pumps use a mechanism to repeatedly expand a cavity, allow gases to flow in from the chamber, seal off the cavity, and exhaust it to the atmosphere. Momentum transfer pumps, also called molecular pumps, use high speed jets of dense fluid or high speed rotating blades to knock gas molecules out of the chamber. Entrapment pumps capture gases in a solid or adsorbed state. This includes cryopumps, getters, and ion pumps.

A partial vacuum may be generated by increasing the volume of a container. To continue evacuating a chamber indefinitely without requiring infinite growth, a compartment of the vacuum can be repeatedly closed off, exhausted, and expanded again. This is the principle behind a positive displacement pump, for example the manual water pump. Inside the pump, a mechanism expands a small sealed cavity to reduce its pressure below that of the atmosphere. Because of the pressure differential, some fluid from the chamber (or the well, in our example) is pushed into the pump's small cavity. The pump's cavity is then sealed from the chamber, opened to the atmosphere, and squeezed back to a minute size.

More sophisticated systems are used for most industrial applications, but the basic principle of cyclic volume removal is the same:

The base pressure of a rubber- and plastic-sealed piston pump system is typically 1 to 50 kPa, while a scroll pump might reach 10 Pa (when new) and a rotary vane oil pump with a clean and empty metallic chamber can easily achieve 0.1 Pa.

A positive displacement vacuum pump moves the same volume of gas with each cycle, so its pumping speed is constant unless it is overcome by backstreaming. 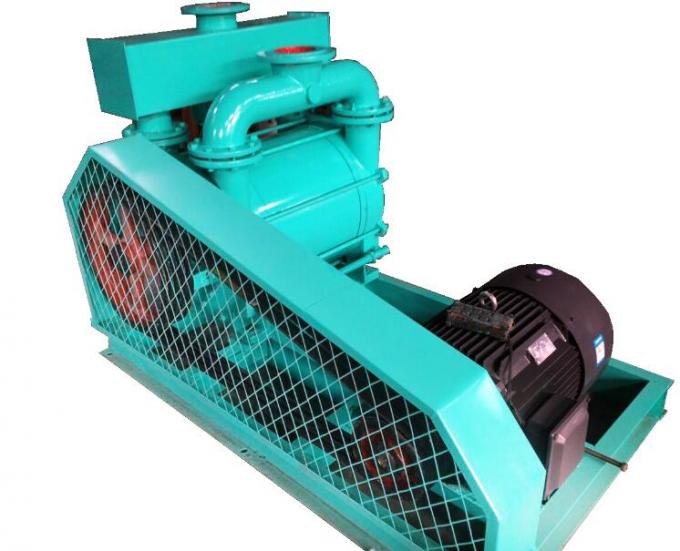