Historically, coal was gasified using early technology to produce coal gas (also known as "town gas"), which is a combustible gas traditionally used for municipal lighting and heating before the advent of industrial-scale production of natural gas.

During gasification, the coal is blown through with oxygen and steam (water vapor) while also being heated (and in some cases pressurized). If the coal is heated by external heat sources the process is called "allothermal", while "autothermal" process assumes heating of the coal via exothermal chemical reactions occurring inside the gasifier itself. It is essential that the oxidizer supplied is insufficient for complete oxidizing (combustion) of the fuel. During the reactions mentioned, oxygen and water molecules oxidize the coal and produce a gaseous mixture of carbon dioxide (CO2), carbon monoxide (CO), water vapour (H2O), and molecular hydrogen (H2). (Some by-products like tar, phenols, etc. are also possible end products, depending on the specific gasification technology utilized.) This process has been conducted in-situ within natural coal seams (referred to as underground coal gasification) and in coal refineries. The desired end product is usually syngas (i.e., a combination of H2 + CO), but the produced coal gas may also be further refined to produce additional quantities of H2:

If the refiner wants to produce alkanes (i.e., hydrocarbons present in natural gas, gasoline, and diesel fuel), the coal gas is collected at this state and routed to a Fischer-Tropsch reactor. If, however, hydrogen is the desired end-product, the coal gas (primarily the CO product) undergoes the water gas shift reaction where more hydrogen is produced by additional reaction with water vapor:

"Direct blowing" assumes the coal and the oxidizer being supplied towards each other from the opposite sides of the reactor channel. In this case the oxidizer passes through coke and (more likely) ashes to the reaction zone where it interacts with coal. The hot gas produced then passes fresh fuel and heats it while absorbing some products of thermal destruction of the fuel, such as tars and phenols. Thus, the gas requires significant refining before being used in the Fischer-Tropsch reaction. Products of the refinement are highly toxic and require special facilities for their utilization. As a result, the plant utilizing the described technologies has to be very large to be economically efficient. One of such plants called SASOL is situated in the Republic of South Africa (RSA). It was built due to embargo applied to the country preventing it from importing oil and natural gas. RSA is rich in Bituminous coal and Anthracite and was able to arrange the use of the well known high pressure "Lurgi" gasification process developed in Germany in the first half of 20th century.

"Reversed blowing" (as compared to the previous type described which was invented first) assumes the coal and the oxidizer being supplied from the same side of the reactor. In this case there is no chemical interaction between coal and oxidizer before the reaction zone. The gas produced in the reaction zone passes solid products of gasification (coke and ashes), and CO2 and H2O contained in the gas are additionally chemically restored to CO and H2. As compared to the "direct blowing" technology, no toxic by-products are present in the gas: those are disabled in the reaction zone. This type of gasification has been developed in the first half of 20th century, along with the "direct blowing", but the rate of gas production in it is significantly lower than that in "direct blowing" and there were no further efforts of developing the "reversed blowing" processes until 1980-s when a Soviet research facility KATEKNIIUgol' (R&D Institute for developing Kansk-Achinsk coal field) began R&D activities to produce the technology now known as "TERMOKOKS-S" process. The reason for reviving the interest to this type of gasification process is that it is ecologically clean and able to produce two types of useful products (simultaneously or separately): gas (either combustible or syngas) and middle-temperature coke. The former may be used as a fuel for gas boilers and diesel-generators or as syngas for producing gasoline, etc., the latter - as a technological fuel in metallurgy, as a chemical absorbent or as raw material for household fuel briquettes. Combustion of the product gas in gas boilers is ecologically cleaner than combustion of initial coal. Thus, a plant utilizing gasification technology with the "reversed blowing" is able to produce two valuable products of which one has relatively zero production cost since the latter is covered by competitive market price of the other. As the Soviet Union and its KATEKNIIUgol' ceased to exist, the technology was adopted by the individual scientists who originally developed it and is now being further researched in Russia and commercially distributed worldwide. Industrial plants utilizing it are now known to function in Ulaan-Baatar (Mongolia) and Krasnoyarsk (Russia).

Pressurized airflow bed gasification technology created through the joint development between Wison Group and Shell (Hybrid). For example: Hybrid is an advanced pulverized coal gasification technology, this technology combined with the existing advantages of Shell SCGP waste heat boiler, includes more than just a conveying system, pulverized coal pressurized gasification burner arrangement, lateral jet burner membrane type water wall, and the intermittent discharge has been fully validated in the existing SCGP plant such as mature and reliable technology, at the same time, it removed the existing process complications and in the syngas cooler (waste pan) and [fly ash] filters which easily failed, and combined the current existing gasification technology that is widely used in synthetic gas quench process. It not only retains the original Shell SCGP waste heat boiler of coal characteristics of strong adaptability, and ability to scale up easily, but also absorb the advantages of the existing quench technology. 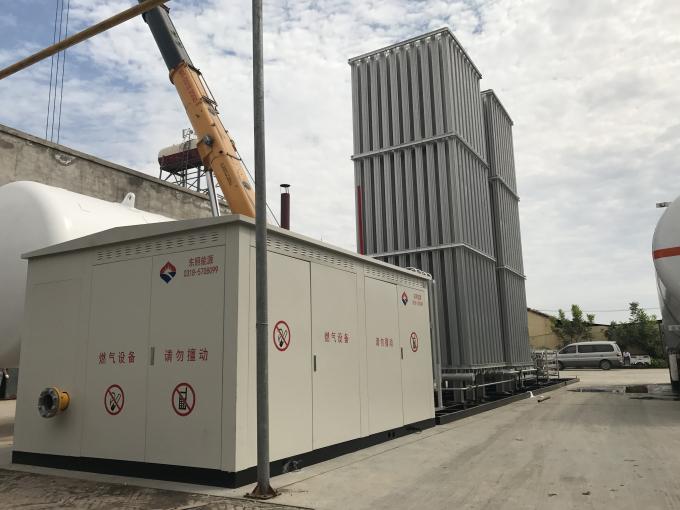