The combustion flue gas from the catalyst regenerator of a fluid catalytic cracker is at a temperature of about 715 °C and at a pressure of about 2.4 barg (240 kPa gauge). Its gaseous components are mostly carbon monoxide (CO), carbon dioxide (CO2) and nitrogen (N2). Although the flue gas has been through two stages of cyclones (located within the regenerator) to remove entrained catalyst fines, it still contains some residual catalyst fines.

The figure depicts how power is recovered and utilized by routing the regenerator flue gas through a turboexpander. After the flue gas exits the regenerator, it is routed through a secondary catalyst separator containing swirl tubes designed to remove 70–90% of the residual catalyst fines.This is required to prevent erosion damage to the turboexpander.

The expanded flue gas is then routed through a steam-generating boiler (referred to as a CO boiler), where the carbon monoxide in the flue gas is burned as fuel to provide steam for use in the refinery.

The flue gas from the CO boiler is processed through an electrostatic precipitator (ESP) to remove residual particulate matter. The ESP removes particulates in the size range of 2 to 20 micrometers from the flue gas. 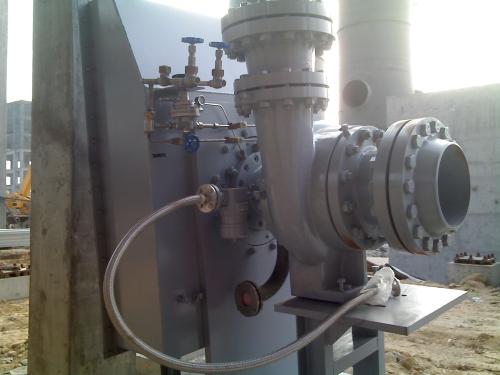