Because of the historical path of development of machine tool technology, the natural language terminology used to name automatic lathes, at least in English, is not hierarchical in quite the way that a manufacturing layperson might expect. Retronymy (and, in other respects, lack of retronymy) have shaped the nomenclature. However, it is easy enough to understand once a bit of history is known (as explained below).

The term "automatic lathe" is still often used in manufacturing in its earlier sense, referring to automated lathes of non-CNC types. The first kinds of automatic lathes were mechanically automated ones (whose control is via cams or tracers and pantographs). Thus, before electronic automation via numerical control, programmable logic controllers, and so on, the "automatic" in the term "automatic machine tool" always referred implicitly to mechanical automation.

The earliest mechanically automated lathes were geometric lathes. These included Rose engine lathes and others. In industrial contexts during the Machine Age, the term "automatic lathe" referred to mechanical screw machines and chuckers (discussed below), of which a large variety of types, brands, and models were built.

Since the maturation of CNC, the implicit dichotomy of "manual versus automatic" still exists, but because CNC is so ubiquitous, the term "automatic" has lost some of its distinguishing power. All CNC machine tools are automatic, but (perhaps therefore) the usage of the machining industries does not routinely call them by that term. The term "automatic", when it is used at all, still often refers implicitly to cam-operated machines. Thus a "plain old" 2-axis CNC lathe is not referred to as an "automatic lathe" (even though it is, literally speaking, automatic). However, within the machining subspecialty of Swiss-type[4] CNC turning centers, the word "automatic" is often used freely for cam-op and CNC alike (for example, DMG Mori[5] and Tsugami call their Swiss-type CNCs "automatic lathes").

Small- to medium-sized cam-operated automatic lathes were (and still are) usually called screw machines or automatic screw machines. These machines work on parts that (as a rough guide only) are usually less than 80 millimetres (3.1 in) in diameter and less than 300 millimetres (12 in) long. Screw machines almost invariably do bar work, which means that an entire length of bar stock (anywhere from 1 to 4 m (3.3 to 13.1 ft) in length) passes through the spindle and is gripped by the chuck (which is usually a collet chuck). As the part is being machined, the entire length of bar stock is turning with the spindle. When the part is done, it is "parted off" from the bar, the chuck un-clamps, the bar is fed forward, and the chuck then closes again, ready for the next cycle. The bar-feeding can happen by various means, including pulling-finger tools that grab the bar and pull or roller bar feed that pushes the bar from behind.

Larger cam-operated automatic lathes were (and still are) usually called automatic chucking lathes, automatic lathes, automatic chuckers, automatics, or chuckers. The "chucker" part of the name comes from the fact that the workpieces are usually discrete blanks, held in a bin called a "magazine", and each one takes a turn at being chucked (gripped by the machine for being worked on) and cut. (This is analogous to the way that each round of ammunition in the magazine of a semi-automatic pistol gets its turn at being chambered.) The blanks are either individual forgings or castings, or they are pre-sawed pieces of billet. However, some members of this family of machine tools turn bar work or work on centers (for example, the Fay automatic lathe). Regarding bar work of large diameter (for example, 150 millimetres (5.9 in) or more), it is merely an academic point whether it is called "screw machine work" or just "automatic work". 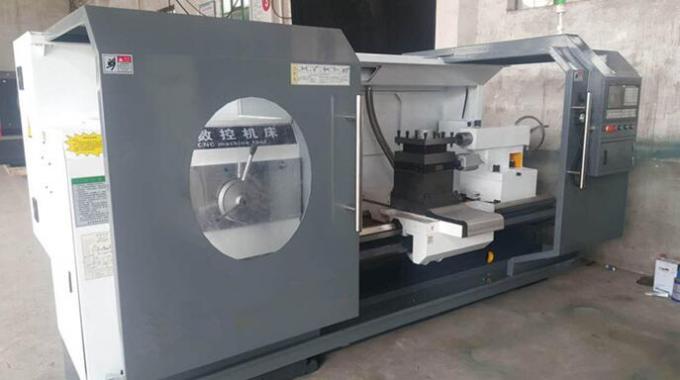