A centrifugal fan is a mechanical device for moving air or other gases. The terms "blower" and "squirrel cage fan", (because it looks like a hamster wheel), are frequently used as synonyms. These fans increase the speed and volume of an air stream with the rotating impellers.

The centrifugal fan has a drum shape composed of a number of fan blades mounted around a hub. As shown in the animated figure, the hub turns on a driveshaft mounted in bearings in the fan housing. The gas enters from the side of the fan wheel, turns 90 degrees and accelerates due to centrifugal force as it flows over the fan blades and exits the fan housing.

Main parts of a centrifugal fan are :

The fan drive determines the speed of the fan wheel (impeller) and the extent to which this speed can be varied. There are three basic types of fan drives.

The fan wheel can be linked directly to the shaft of an electric motor. This means that the fan wheel speed is identical to the motor's rotational speed. With this type of fan drive mechanism, the fan speed cannot be varied unless the motor speed is adjustable. Air conditioning automatically provides faster speed because colder air is denser.

Some electronics manufacturers have made centrifugal fans with external rotor motors (the stator is inside the rotor), and the rotor is directly mounted on the fan wheel (impeller).

A set of sheaves is mounted on the motor shaft and the fan wheel shaft, and a belt transmits the mechanical energy from the motor to the fan.

Variable drive fans may use hydraulic or magnetic couplings (between the fan wheel shaft and the motor shaft) that allow variable speed. The fan speed controls are often integrated into automated systems to maintain the desired fan wheel speed.

An alternate method of varying the fan speed is to use an electronic variable-speed drive to control the speed of the motor driving the fan. This offers better overall energy efficiency than mechanical couplings, especially at greatly-reduced speeds.

Bearings are an important part of a fan. Sleeve-ring oil bearings are used extensively in fans. Some sleeve-ring bearings may be water-cooled. Water-cooled sleeve bearings are often used when the fan moves hot gases. Heat is conducted through the shaft and into the oil, which must be cooled to prevent overheating the bearing. Lower-speed fans have bearings in hard-to-reach spots, so they use grease-packed bearings.

Many turbo blowers use either an air bearing or a magnetic bearing.

Inlet dampers (inlet vanes) reduce fan energy usage due to their ability to affect the airflow pattern into the fan.

The fan wheel consists of a hub with a number of fan blades attached. The fan blades on the hub can be arranged in three different ways: forward-curved, backward-curved or radial.

Forward-curved blades in a household fan

Forward-curved blades, as in Figure 3(a), curve in the direction of the fan wheel's rotation. These are especially sensitive to particulates and commonly are only specified for clean-air applications such as air conditioning. Forward-curved blades provide a low noise level and relatively small air flow with a high increase in static pressure.

Backward-curved blades, as in Figure 3(b), curve against the direction of the fan wheel's rotation. Smaller blowers may have backward-inclined blades, which are straight, not curved. Larger backward-inclined/-curved blowers have blades whose backward curvatures mimic that of an airfoil cross section, but both designs provide good operating efficiency with relatively economical construction techniques. These types of blowers are designed to handle gas streams with low to moderate particulate loadings[They can be easily fitted with wear protection but certain blade curvatures can be prone to solids build-up.Backward curved wheels are often heavier than corresponding forward-curved equivalents, as they run at higher speeds and require stronger construction.

Radial blowers, as in Figure 3(c), have wheels whose blades extend straight out from the centre of the hub. Radial bladed wheels are often used on particulate-laden gas streams because they are the least sensitive to solid build-up on the blades, but they are often characterized by greater noise output. High speeds, low volumes, and high pressures are common with radial blowers, and are often used in vacuum cleaners, pneumatic material conveying systems, and similar processes. 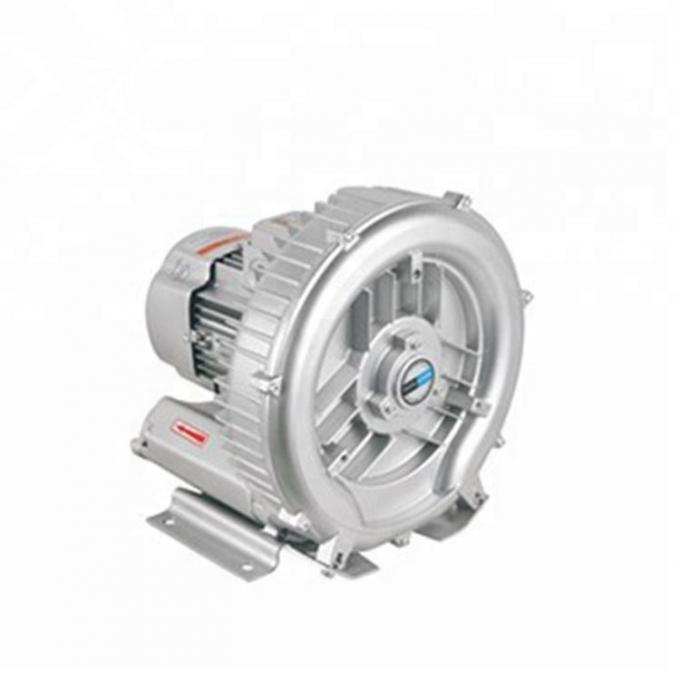