Oxygen finds broad application in various technological processes and in almost all industry branches. The primary oxygen application is associated with its capability of sustaining burning process, and the powerful oxidant properties.

Due to that, oxygen has become widely used in the metal processing, welding, cutting and brazing processes. In the chemical and petrochemical industries, as well as in the oil and gas sector oxygen is used in commercial volumes as an oxidizer in chemical reactions.

The use of oxygen in gas-flame operations, such as metal welding, cutting and brazing is one of the most significant and common applications of this gas. Oxygen allows generating high-temperature flame in welding torches thus ensuring high quality and speed of work performance.

Oxygen is heavily used in the metal industry where it helps to increase burning temperature by the production of ferrous and non-ferrous metals and significantly improve the overall process efficiency. Another important oxygen application in the metal industry is connected with its use for carbon fixation with the yield of carbon dioxide.

In the chemical and petrochemical industries, oxygen is widely used for oxidation of raw chemicals for recovery of nitric acid, ethylene oxide, propylene oxide, vinyl chloride and other important chemical compounds.

In the oil and gas industry, oxygen finds application as a means for viscosity improvement and enhancement of oil-and-gas flow properties. Oxygen is also used for boosting production capacity of oil cracking plants, efficiency of high-octane components processing, as well as for the reduction of sulfuric deposits in refineries.

The use of oxygen in the fish farming helps increase the survival and fertility ratios and reduce the incubation period. Along with fish culture, oxygen is applied for shrimps, crabs and mussels rearing.

Adsorption principleGas separation by adsorption systems is based on the fixation of various gas mixture components by a solid substance called adsorbent. Physically, this phenomenon is brought about by the forces of gas and adsorbent molecules interaction.

The current methods of gaseous oxygen production from air with the use of adsorption technology are nearly brought to perfection. The operation of a modern oxygen adsorption plant is based on the dependence of gas intake by adsorbent on the temperature and partial pressure of a gas component.

The gas adsorption and adsorbent regeneration processes may therefore be regulated by varying of the pressure and temperature parameters.

The adsorption oxygen plants produce 5 to 5,000 Nm3/h of oxygen with a purity of 93-95%. These systems, designated for indoor operation, are set to effectively produce gaseous oxygen from atmospheric air.

An unquestionable advantage of adsorption-based oxygen plants is the low cost of oxygen produced in the cases where there are no rigid requirements to the product oxygen purity.

Where gaseous oxygen purity is required at the level of 90-95% with the capacity of up to 5,000 Nm3 per hour, adsorption oxygen plants are the optimal choice. This oxygen purity may also be obtained through the use of systems based on the cryogenic technology; however, cryogenic plants are more cumbersome and complex in operation. 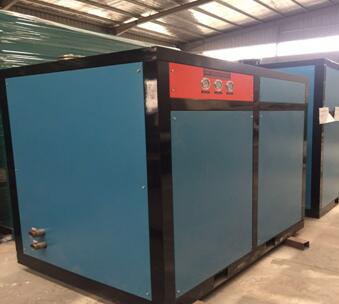