A tank container is built to the ISO standards, making it suitable for different modes of transportation. Both hazardous and non-hazardous products can be transported in tank containers.
A tank container is a vessel of stainless steel surrounded by an insulation and protective layer of usually polyurethaneand aluminum. The vessel is in the middle of a steel frame. The frame is made according to ISO standards and is 19.8556 feet (6.05 meters) long, 7.874 feet (2.40 meters) wide and 7.874 feet (2.40 meters) or 8.374 feet (2.55 meters) high. The contents of the tank range from 17,500 to 26,000 liters (3,800 to 5,700 imp gal; 4,600 to 6,900 U.S. gal). There are both smaller and larger tank containers, which usually have a size different from the ISO standard sizes. For example, there are some 27,000 liters (5,900 imp gal; 7,100 U.S. gal) and above litre tank containers in the European swap body fleets in Europe but they are not used on international business only on intra European traffic. The trade organization @TCO estimates that as of January 1st, 2018 the global fleet of tank containers stands at 552,000 units.[1] Most of these tank containers are owned by operators and leasing companies.
ISO tank containers built to transport hazardous cargo have to meet a variety of regulations including but not limited to IMDG, ADR-RID- US DOT and other. There are a variety of UN Portable tank types, the most common of which is T11 as it is permitted to transport a thousand or more hazardous bulk chemicals.
There are hundreds of tank container operators worldwide; they can vary on the service they offer. The bigger operators typically offer a wide range of services, while smaller operators may only offer services in one region or with one type of tank.

The tank container concept was also employed in Europe by Bob Fossey, an engineer who worked for Williams Fairclough in London. They improved on the 1950s framed American elliptical container tanks, oft noted carrying specified USA engine oils for the UK’s MoD aircraft built in Preston, Lancashire. In 1964 Fairclough made a swap body tank for combined transport by truck and train, but not yet constructed according to ISO standards. In 1966, commercial production began and one year later the first tank container to ISO dimensions was developed. The first mass-produced tank containers were purchased by Trafpak, a part of Pakhoed.
In 1969, the ISOTANK was registered as a name by Andrews of Aintree Ltd., Liverpool. Theirs were the first ISO container tanks in the world to get Lloyds Register and the UK DoT Hazardous Goods Department design approvals for international transport. They were essential and additional to UK approvals, much good advice was gained from several relevant, sound authorities in USA; Canada; Australia; R S Africa et al..
Built by Andrews of Aintree., Liverpool, and tested at Ellis Research facility. George Lambert, the ISOTANK’S designer, was also the company’s division head, thus responsible for sales or advising clients on the new product’s wide range of complex issues.
This first order to Andrews came from a major shipping line entering the bulk sensitive liquids by ISO means. It was reported as won by merit of the approved data and reputation. The initial order was for 20 off insulated and electrically heated units, 10 for hazardous substances, 10 for non- hazardous substances.
In the early 1970s. The tank container evolved to its current form and the production was also well underway. In the early days, production took place in Europe. In 2010 and afterward, production is mainly in China and South Africa. 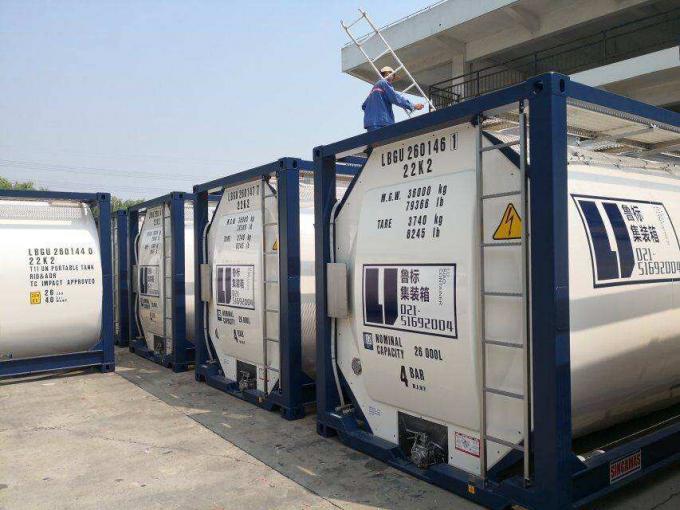