Ninety percent of the global container fleet consists of "dry freight" or "general purpose" containers – both of standard and special sizes.And although lengths of containers vary from 8 to 56 feet (2.4 to 17.1 m), according to two 2012 container census reports[about 80% of the world's containers are either twenty or forty foot standard length boxes of the dry freight design. These typical containers are rectangular, closed box models, with doors fitted at one end, and made of corrugated weathering steel (commonly known as CorTen) with a plywoodfloor.Although corrugating the sheet metal used for the sides and roof contributes significantly to the container's rigidity and stacking strength, just like in corrugated iron or in cardboard boxes, the corrugated sides cause aerodynamic drag, and up to 10% fuel economy loss in road or rail transport, compared to smooth-sided vans.Standard containers are 8-foot (2.44 m) wide by 8 ft 6 in (2.59 m) high, although the taller "High Cube" or "hi-cube" units measuring 9 feet 6 inches (2.90 m) have become very common in recent years. By the end of 2013, high-cube 40 ft containers represented almost 50% of the world's maritime container fleet, according to Drewry's Container Census report.

About 90% of the world's containers are either nominal 20-foot (6.1 m) or 40-foot (12.2 m) long,although the United States and Canada also use longer units of 45 ft (13.7 m), 48 ft (14.6 m) and 53 ft (16.15 m). ISO containers have castings with openings for twistlock fasteners at each of the eight corners, to allow gripping the box from above, below, or the side, and they can be stacked up to ten units high. Regional intermodal containers, such as European and U.S. domestic units however, are mainly transported by road and rail, and can frequently only be stacked up to three laden units high. Although the two ends are quite rigid, containers flex somewhat during transport.

Container capacity is often expressed in twenty-foot equivalent units (TEU, or sometimes teu). A twenty-foot equivalent unit is a measure of containerized cargo capacity equal to one standard 20-foot (6.1 m) long container. This is an approximate measure, wherein the height of the box is not considered. For example, the 9 ft 6 in (2.9 m) tall high-cube, as well as 4-foot-3-inch half-height (1.3 m) 20-foot (6.1 m) containers are equally counted as one TEU. Similarly, extra long 45 ft (13.72 m) containers are commonly designated as two TEU, no different than standard 40 feet (12.19 m) long units. Two TEU are equivalent to one forty-foot equivalent unit (FEU).In 2014 the global container fleet grew to a volume of 36.6 million TEU, based on Drewry Shipping Consultants' Container Census.Moreover, in 2014 for the first time in history 40-foot High cube containers accounted for the majority of boxes in service, measured in TEU.Manufacturing prices for regular, dry freight containers are typically in the range of $1750—$2000 U.S. per CEU (container equivalent unit), and about 90% of the world's containers are made in China.The average age of the global container fleet was a little over 5 years from end 1994 to end 2009, meaning containers remain in shipping use for well over 10 years.

Other than the standard, general purpose container, many variations exist for use with different cargoes. The most prominent of these are refrigerated containers (a.k.a. reefers) for perishable goods, that make up six percent of the world's shipping boxes. And tanks in a frame, for bulk liquids, account for another 0.75% of the global container fleet.

Although these variations are not of the standard type, they mostly are ISO standard containers – in fact the ISO 6346standard classifies a broad spectrum of container types in great detail. Aside from different size options, the most important container types are:

Containers for Offshore use have a few different features, like pad eyes, and must meet additional strength and design requirements, standards and certification, such as the DNV2.7-1 by Det Norske Veritas and the European standard EN12079: Offshore Containers and Associated Lifting Sets.

A multitude of equipment, such as generators, has been installed in containers of different types to simplify logistics – see containerized equipment for more details.

Swap body units usually have the same bottom corner fixtures as intermodal containers, and often have folding legs under their frame so that they can be moved between trucks without using a crane. However they frequently don't have the upper corner fittings of ISO containers, and are not stackable, nor can they be lifted and handled by the usual equipment like reach-stackers or straddle-carriers. They are generally more expensive to procure. 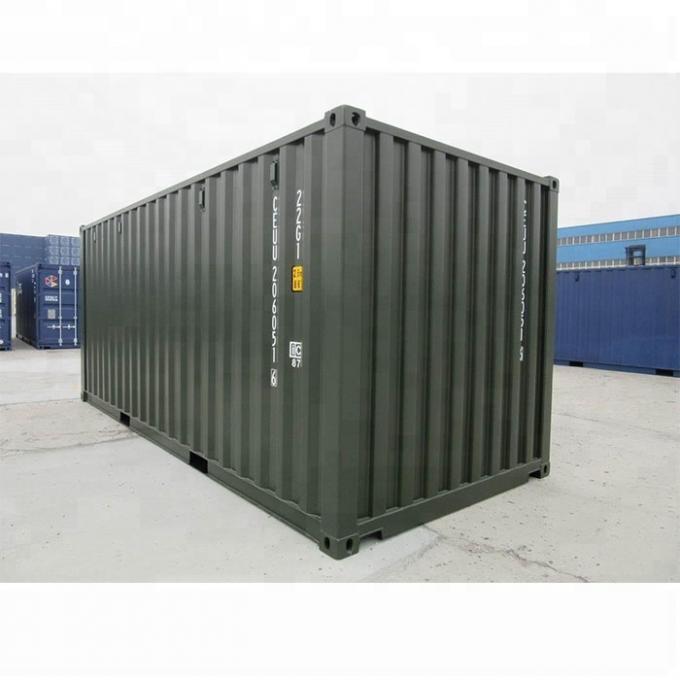